When I received my copy of Terrance Hayes’ book American Sonnets for my Past and Future Assassin I decided that I wanted to freshen up my sonnet unit to look beyond the traditional sonnets. I had about six 90-minute class periods to devote to sonnets before Spring Break. This was combined with other studies of poetry including reading a pair of poems per day for our March Madness unit and students were also working on compiling their personal poetry anthologies.

We started with traditional notes about the Italian/Petrarchan sonnet, the English/Shakespearean sonnet, and the Spenserian sonnet. It struck me that the sonnet form, which is traditional in many ways, was changed early on by English writers who wanted to adjust the form to include a rhyming couplet. The idea of the sonnet continuing to change and evolve is not such a foreign concept in this context.

I highly recommend that teachers read the article “Chaos in Fourteen Lines” by Annie Finch for a compelling look at sonnets from Edna St. Vincent Millay, Robert Frost, William Shakespeare, Gerard Manly Hopkins, Gwendolyn Brooks, Robert Lowell, John Berryman, and many more poets who have explored the form. Finch examines the idea of why the sonnet form continues to be revisited by poets while also looking at the modern changes that writers have made to make the sonnet their own.

A discussion regarding the logical organization of sonnets (questions and answers, the turn or volta, and the final answer) and the formal organization (stanza breaks, rhyme scheme) was essential to establish a baseline of what a traditional sonnet is before we could look at what makes a sonnet modern or contemporary. Of course, we also needed to take a step back and make sure that students understood basic iambic pentameter.

Here is a look at the rough breakdown of our study:

After viewing this Living Iambic Pentameter video from Folger, I adapted this to my classroom by choosing two students: one soft-spoken and one more boisterous. They respectively represented an unstressed and stressed syllable. We took notes on the traditional sonnet forms and practiced identifying rhyme schemes and scanning lines of iambic pentameter. We finished the day with each student being assigned a line of Shakespeare’s Sonnet 116 to scan and paraphrase to make meaning in context. 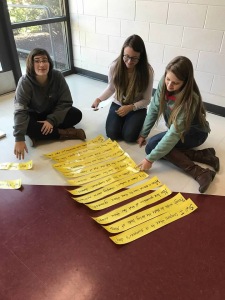 After correctly organizing the sonnet in sentence strips, students answered guiding reading questions (in our textbook) and then taught the sonnet to the class. I then assigned Claude McKay’s “If We Must Die” sonnet exercise as an independent check for understanding. This also gave them a chance to pen a little iambic pentameter on their own.

Students were given a sonnet assessment, much like the work on the McKay exercise, but on a sonnet they had not read before. Students did very well on this, and I knew we were ready to move forward and “disrupt” the idea of a sonnet. This article “The Politics and Play of Terrance Hayes” in The New Yorker was a great resource as I read through and annotated Hayes’ collection.

Students were provided with this listening document for annotations as we explored two of Terrance Hayes’ poems while listening to a 12 minute podcast from the editors of Poetry magazine. This allowed students to hear what experts observe in a modern sonnet. This includes a discussion of “I lock you in an American sonnet part prison, part panic closet” with its “Voltas of acoustics, instinct & metaphor.”

We explored traditional sonnets from Keats (“When I Have Fears”) and Milton (“How Soon Hath Time” and “When I Consider How my Light is Spent”) and compared them to modern sonnets by John Barryman (“Sonnet 13”), Sherman Alexie (“Facebook Sonnet”), and Kyle Dargan (“States May Sing Their Song of Praise“).

Day Five: How to Write about a Sonnet

The Echo Sonnet AP prompt is another example of a modern twist on the traditional sonnet. We also took some time to look at the released essays particularly working on moving the provided 5 essay to a higher score.

For He That Looked Not Upon Her or Thou Blind Man’s Mark both provide excellent choices for writing a sonnet analysis. Finally, Sonnet by Billy Collins seems like the perfect way to end this unit with references back to Petrarch as Collins pokes a little fun at the traditional sonnet form with its “iambic bongos”.

While my former unit was a solid study of the traditional sonnet, the lack of modern sonnets made it incomplete and this omission grew to bother me. This updated unit only scratches the surface of the “modern sonnet” potential, and I look forward to adding to this unit each year.